Investigating other ways to create an efficient particle system

After defining our goals with the particle system, we soon came to the conclusion that simulating space orbit and recreating gravity fields was a very complex task with ordinary vertex and fragment shaders.

Since we did not have a solution where we could update the particles' positions on the GPU, we realized we either had to solve that problem or create a function based on time to simulate gravity. However, this is mathematically very complex and requires a numerical solution. Additionally, we would have had to store the time frames for where hands had been in the past, to be able to "remember" how the particles had been simulated up until the current time.

This meant that we after a couple of attempts using the Vertex and Fragment shader started looking for alternate solutions. First we looked at how to implement and use VBO:s (Vertex Buffer Objects). They are normally used to upload vertex data to a GPU device. Since they use the VRAM on the GPU side instead of regular RAM they offer much better performance when used correctly. Unfortunately, we couldn't find any good examples of how to use them when scripting in C# and Unity, so we continued our search for other solutions. 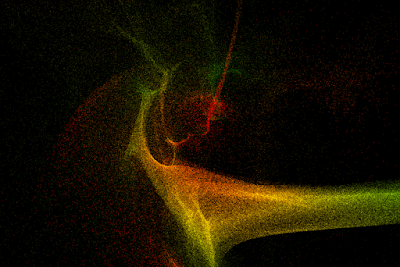 We then looked at other types of shaders. We found that compute shaders is a very good and quite straight forward solution when creating a system with a lot of particles. Basically, compute shaders is a more modern technology compared to vertex shaders where the shader takes advantage of a large number of the GPU:s parallel processors for computing purposes, which enables high-level graphics. For example, many particle effects and systems in modern games use compute shaders to do graphical calculations. We found a lot of documentation on compute shaders and particle systems, which was promising. In other words, this seemed to be the solution we was looking for.

Due to how the compute shader works, it requires the GPU device to be fairly modern. In particular, one requirement is that the graphics card supports the DirectX 11 API. This was a problem since the GPU on the computer connected to the big 4K screen was a Quadro FX 5800 which didn't support DX11. So as unfortunate as it was, we couldn't continue with this approach and had to look for other solutions.
Upplagd av Niclas Ericsson kl. 02:42